What a way to kick off your week if you’re a cryptocurrency supporter.

Reports quickly spread on Monday morning claiming that Walmart, one of the biggest retailers in the world, was going to start accepting Litecoin, a cryptocurrency, as payment.

The price of Litecoin quickly spiked. Crypto fans were overjoyed. Mainstream media outlets like CNBC and Reuters shared the news. Even the @Litecoin Twitter account tweeted it out.

The price of Litecoin spiked from around $170 before the press release was distributed to more than $230 in a matter of minutes.

A screenshot showing Litecoin’s value when the fake story broke, as seen on the cryptocurrency exchange Coinbase.
Credit: Screenshot: Mashable

Everything seemed legit…except it wasn’t.

Walmart will not be accepting Litecoin. The report was fake.

On the morning of Sept. 13, a press release was distributed online via GlobeNewswire, a legitimate press release distribution service with the headline “Walmart Announces Major Partnership With Litecoin (LTC).”

The press release claimed Walmart was announcing a partnership with the cryptocurrency Litecoin and would start accepting the alternative digital currency as payment. The release included quotes attributed to Walmart CEO Doug McMillon and Litecoin creator Charlie Lee. 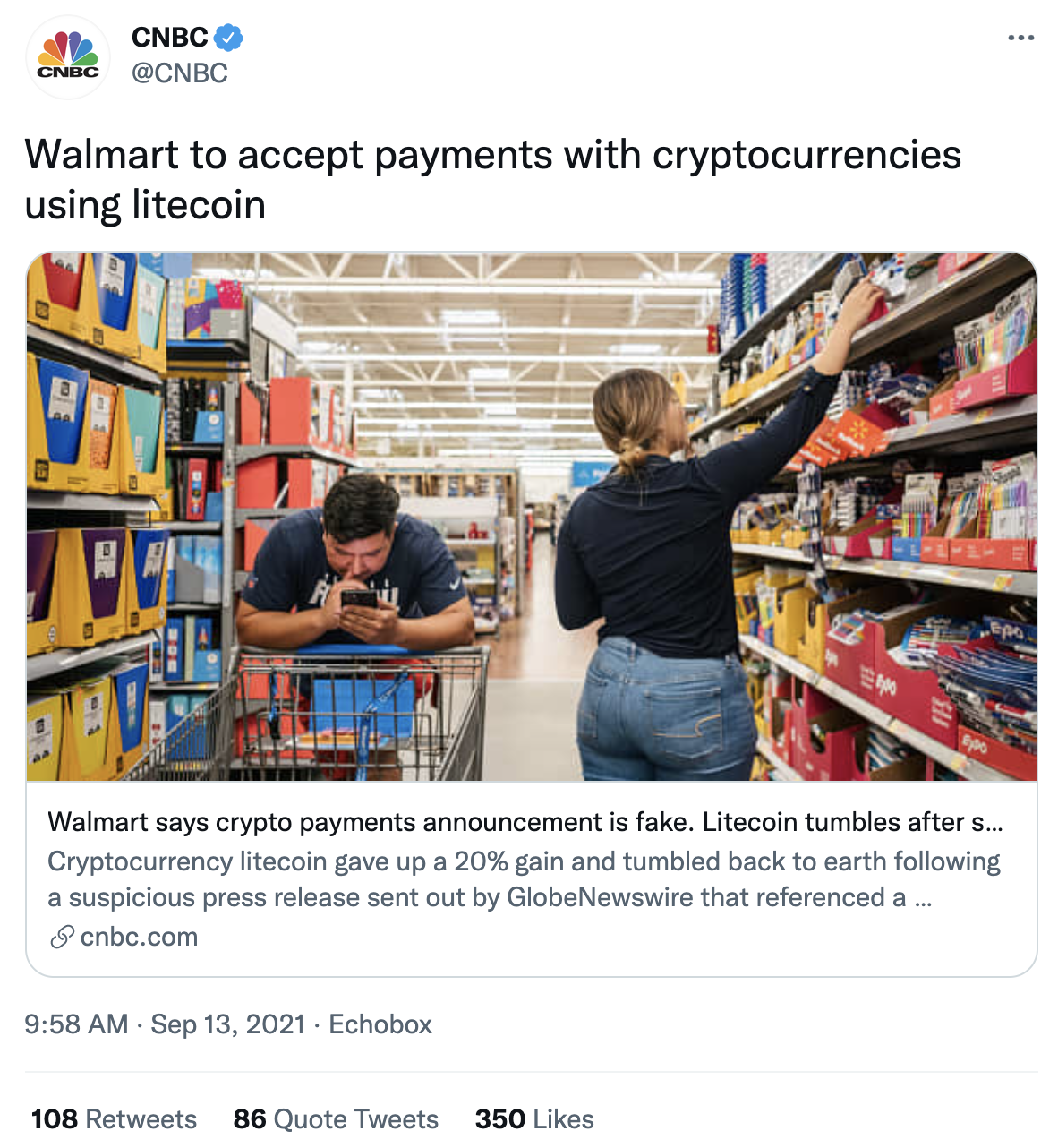 With the press release making the rounds, cryptocurrency blogs started sharing news of the Walmart and Litecoin partnership. Soon mainstream financial news outlets such as CNBC covered the release, with headlines like “Walmart to accept payments with cryptocurrencies using Litecoin.” Reuters hit the news too, its piece consisting entirely of just a few sentences.

With many cryptocurrency advocates excited over the news, the story officially went viral.

Some crypto critics, such as the user behind the popular Twitter account @CryptoWhale, saw red flags with the press release. But, the cryptocurrency community saw the mainstream media coverage of the news as confirmation. When the verified @Litecoin Twitter account shared the announcement on its feed, that solidified the news.

Then, just as quickly as the news spread, it all came falling apart. As the story made waves, Walmart reached out to CNBC to deny the reports, claiming the press release was a fake.

But before the denial, things seemed fishy.

While Litecoin is not an obscure cryptocurrency, a partnership with Walmart would be strange. Especially after a year where Bitcoin and even meme cryptocurrency Dogecoin captivated headline news with its popularity. Walmart could partner with any major cryptocurrency, going with Litecoin didn’t make sense.

Another red flags in the press was an email attributed to William White, Walmart’s chief marketing officer, “[email protected]“

The Walmart contact listed on the press release was to the domain name “walmart-corp.com.” Many corporations use similarly styled domains for its business or investor relations website. Walmart does not use this domain, however. In fact, it appears that they don’t even own it.

The walmart-corp.com domain was registered on Aug. 17, just 27 days ago. The domain obscures its registrant’s contact info with whois privacy provided by domain registrar Namecheap. The domain does not resolve to any website.

The majority of media outlets that originally published the news based on the newswire alert have since retracted its stories, including Reuters and CNBC.

The price of Litecoin has since fallen to around $180 at the time this story was published.

With the Walmart story debunked, that still leaves the questions: How did this happen and why?

Online speculation is leaning heavy towards a pump and dump scheme. Anyone holding Litecoin who sold during that short window before the news was retracted, where Litecoin spiked more than $60 per coin, stood to make a large sum of money rather quickly. It’s unclear if that was the motive, however.

Mashable has reached out to Walmart as well as Intrado, the digital media company that runs the press release distribution service GlobeNewswire, for more information. We will update this story when we hear back.

Senior Editor - September 14, 2021
0
Announced alongside the iPhone 13 range, the new regular iPad is available to order now so here's where you can buy the 2021...

Everything you need to know

‘Chips Act’ Planned by EU to Promote Semi-Conductor Self Sufficiency

Deathloop Beginner’s Guide: 14 Tips to Get You Started

Staples is Practically Handing Out the Surface Pro 7 Right Now

Just by changing its shape, scientists show they can alter material...